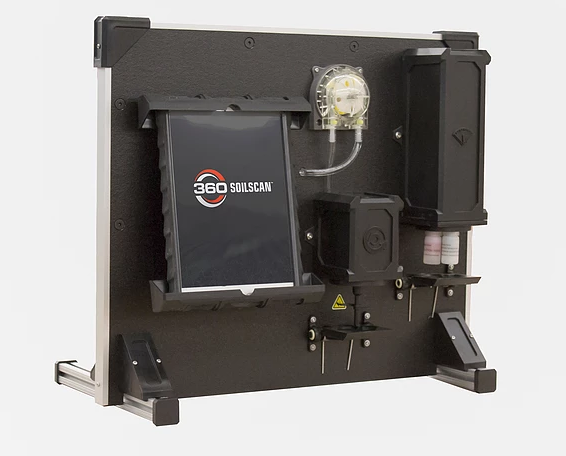 Don’t guess how much nitrogen you have left in your soil – know. 360 SOILSCAN is a portable soil testing system that lets you accurately test nitrate nitrogen availability and soil pH right in your field, in about five minutes.

BUILT FOR THE FIELD

Understanding nitrogen availability in real time takes a system designed for the challenges of the field. With 360 SOILSCAN, you get a soil testing system that’s durable, portable and just as accurate as a commercial soil lab.

Durable: Rugged case protects it from the elements
Expandable: Four sensor slots to allow for future innovations
Portable: Easily transported and operated from the back of your truck or ATV
Functional: Uses your iPad® as the operating platform and upgrades without new hardware

360 SOILSCAN gives you an accurate soil nitrate analysis, based on parts per million, in just five easy steps:

Step 1: Take a soil sample from your field.
Step 2: Place two scoops of soil into the standard Dixie cup provided and place in the mixing station.
Step 3: Mix the soil and distilled water into a slurry.
Step 4: Analyze the soil with 360 SOILSCAN.
Step 5: Use the Corn Nitrogen Need Calculator to determine an application recommendation based on the results.